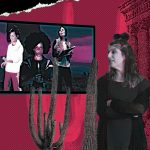 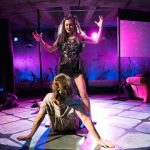 “Minor Theater’s show is an eerily precise, joyfully bloody discourse on how female lust pits the ugly against the beautiful in a ceaseless death match.”
—Julia May Jonas, Culturebot

Teen girls experiment with sex, magic and murder while mom sinks deep into lust and self-loathing. A teen-drama riff on Racine’s Phèdre, Minor Theater’s PATHETIC invites you to get off on the sick horrors of becoming a woman.

PATHETIC was developed in part during a residency at the Baryshnikov Arts Center, New York, NY. Image from this residency. PATHETIC is made possible in part with public funds from Creative Engagement, supported by the New York City Department of Cultural Affairs in partnership with the City Council and administered by LMCC.